Round about the year 2010, my good buddy J.D. Smith from the band Rugged Grace came over to my place to do a little bit of jamming. He showed me a song for which he had written a couple verses, a chorus, melody, and chord progression. It was a slower, haunting tune that was a kind of reflection on Appalachian moonshine and the culture that surrounds it. I got a little excited when he asked me if I could come up with something for it. Especially since I felt like I was having ‘that’ kind of day.


I’ve talked about this in other blogs and I will continue to talk about it in the future. The craft of songwriting is something that can be approached many different ways. Sometimes it takes years to write a single song, picking out words and rhymes from subconscious musings. Other times the words come on all at once like a freight train. I was having ‘that’ kind of day because I knew I was in the zone to get out some lyrics in a hurry.


"The craft of songwriting is something that can be approached many different ways."


He played the tune for me again and I wrote down the words he had already written. I remember we stepped out on my front porch and I sat down with a pen in hand and literally wrote the next five verses (as you hear them today) without stopping; one solid stream of thought. After it was finished I looked back on the song to see what we had. It turned out to be very similar to Sinkhole by the Drive-By-Truckers and Copperhead Road by Steve Earle. But really, the general theme of the song was something very familiar to a lot of people.

Learn how to place music on itunes at ReverbNation.com


As I have said before, I don’t in any way condone the killing of people. I just enjoy a good dramatic story as much as the next person. And I enjoy writing very dramatic songs with intense narratives. The song is about a guy who is backed in the corner by circumstance. His father dies, his kids are hungry, he is struggling with poverty, and he turns to the only solution that he knows- lawless living. At the end of the song the man from the bank comes to collect his money and is met by the main character wielding a loaded rifle. It’s up to the listener to determine what happens next.

I took it to the studio and started to work on some different versions of it. We added all kind of different parts with snaps, claps, and different fiddle parts. At one point I even drove up to Zach’s house in Ark City, Kansas and recorded a guitar riff on a small travel guitar he had. If I’m not mistaken, the only part that survived those earlier takes is the harmonica crescendo during the introduction of the song and the banjo part I also did at Zach’s.

By the time we had the bones of what we would call the final product the rhythm and feel of the song had changed significantly. It went from a slower ballad with each chord ringing out to a more rock rhythm that was closer to Neil Young’s Down By The River. There were even times during experimental recording that we had all electric guitars. Needless to say, it got a little out of hand and we had to reel it in.

When I sent my first scratch tracks to Zach he put down some solid drum takes on the verses. We both racked our brains trying to figure out a cool drum part for the chorus. At the time, I was a new Dad and we were at another kids birthday party with my daughter who was only a few months old. I was scarfing down a piece of cake when a drum part popped in my head. I asked my wife Dana to watch our daughter for a second while I ran to the car.

The thing about drums is that they aren't very portable and it would be a great hassle to carry them around with me everywhere I go. Nevertheless, when the musings come you have to get the idea into some kind of tangible format before it's whisked away. So i used the very handy voice recorder on my phone to do an example of the drum part ‘beatbox-style’.

😎 Zach smelt exactly what I was stepping in and laid down the part in real drums just as I had envisioned it in my head. From then on we referred to the drum parts in the song as “doogie-cheeses” and it has kind of been an ongoing joke every since.

Thank goodness for Zach on this song. He really took this song for his own and added a lot of color. He spent a lot of time working on the parts to get them right, adding different flavors and effects as he went. He spent so much time on it at one point he sent me a version labeled ‘Ain't Livin’ (AS GOOD AS IT GETS!)’.

In 2016 we really buckled down and started putting the finishing touched on the song. We had bass, drums, percussion, and rhythm guitar the way we wanted it so we called up Scott Hunt to play fiddle and mandolin. Scott is an exceptional instrumentalist and one of the coolest guys I've ever met.

I first met Scott at the Powerhouse in Oklahoma City. I was doing a Black Friday jam with Kelly and Buffalo Rogers, Kevin “Haystack” Foster, and a couple others. Scott Hunt walked in mid-song, tuned up his fiddle, and jumped right in. It was an absolute brilliant performance. Some of the best musicians I have either met on stage or right before going on stage. 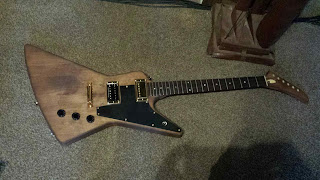 Bryon White (of Damn Quails fame) came in next to put down some lead parts on the electric guitar. He played a Gibson Explorer T. Hodge refurbished. Bryon’s takes were spot on, as usual. It was important for me to get Bryon to put some ‘stank’ on the song because it gave it the perfect balance between Americana and Rock.

After Scott and Bryon had their parts we had everything that we needed to start editing and mixing. I basically moved in at the T. Hodge Lodge for a few days in order to get this done. Editing Ain't Living was a daunting task. When I first opened the project file it was one of the biggest files we had. Between all the different takes from all the different instruments, it looked like a big mess that we had to somehow make sense of. I got the core rhythm tracks the way I wanted them and then started to work in Bryon and Scott's leads. They each did roughly three takes on the song. I went through the song, measure by measure, auditioning each of the three takes. Most of the parts were solid gold so it was hard to choose the best. By the time I finished it was enough to make sense out of. I handed the project over to T. Hodge to spit shine and I packed my bags and headed home. 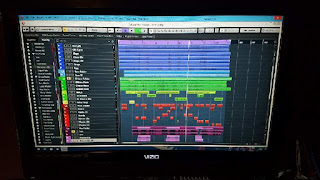 T. Hodge is our guru for anything that is musically technical. He has honed in his skills over the past several years to make his own way as a music producer and mixing engineer. His studio, the T. Hodge Lodge, has all of the capabilities and equipment of any commercial recording studio. The atmosphere is eclectic and cozy and just a fun place to hang out in general.

"T. Hodge is our guru for anything that is musically technical"

When Travis sent me the final mix I was blown away. He really made it shine in a way I never imagined. He uses his DAW, pre amps, compressors, and other gear as instruments. If you think about it, mixing and recording is an art form just like musicianship.

I'm really happy with the way this song turned out. I wanted it to be the first one on the EP because I feel it is the most unique and is a good representation of who Joel T. Mosman & Oklahoma Uprising are as a band. You can download the entire EP for only $6 below and it would really help us out a ton. We worked really hard on it and I hope you like it!

For more information, tshirts, videos, music, and to sign up for our email list go to http://www.oklahomauprising.com